Skaters Benefit from Orthotic Use

The age or skating level at which orthotics should be used varies. A better question to ask is whether or not a skater will benefit from them. Foot mechanics involve complex structures and positions. Consisting of 26 bones (Fig. 1), the foot is supported and controlled by ligaments, muscles, and tendons that provide the skater with powerful and precise movements. If proper positioning of these bones and joints is absent, then problems arise. The roll an orthotic plays in figure skating should never be underestimated but instead, seriously considered. 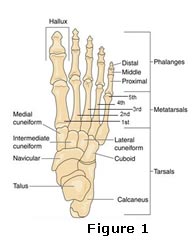 The foot and ankle are the first shock absorbing mechanisms in the body. In figure skating, tremendous forces are generated through the feet, ankles, legs, knees, and spine when jumping. The landing force from a jump can generate 3-5 times a skater’s body weight. Knowing this makes it even more important to recognize potential foot problems and mal-alignment factors.

Minor problems and imbalances in the feet play a major role in skating performance due to the critical effect of foot function in maintaining precision balance while skating. If proper attention is not paid to the correct positioning of the bones in your feet and others factors, eventual irritations can lead to boney growths on the outside of the heel, arch, and on the inside of the ankle. In addition, falls become more frequent, arch and leg cramps can appear, and poor skating performance is a result.

Biomechanical and alignment problems affect over 85% of the population. Prescription orthotics is the only precise way to position and align the foot and ankle into a “neutral position”; allowing other joints to provide controlled movement in skating. As a result of both the boot and foot working together, a skater will experience quicker starts and stops, faster spins, and higher more explosive jumps.

To correctly make a prescription orthotic for a skate, a complete analysis of the foot and several numerical calculations are necessary. After performing a complete analysis and casting of the feet (Fig. 2, thru 9) the information is then sent to a lab where a trained technician will make the orthotic.

In layman’s terms and for our general reference, an orthotic is an appliance used in skates to allow the muscles, tendons, and bones in the feet and lower legs to function optimally (Fig. 10). Slight imbalances in the feet that may not be harmful or even detected under normal circumstances could make a skater more vulnerable to injury from the extra stress of skating.

Appropriately prescribed orthotics can reduce pain, not only in the feet, but also in other parts of the body, such as the knees, hips, and spine. Orthotics can also increase the stability in an unstable joint, prevent a deformed foot from developing additional problems, and improve your overall quality of life.

Orthotics can be especially beneficial to figure skaters in helping to increase endurance, performance, and strength: particularly high-level competitors who place a great deal of movement and pressure on their feet. By eliminating the need for your muscles to compensate for faint imbalances, orthotics can reduce fatigue and promote muscle function to enhance performance. When achieving enough functional correction, the foot is now aligned to give more propulsion, making skating in general more mechanically efficient. In older adult skaters who may have developed arthritis, orthotics can be particularly effective in relieving foot fatigue and discomfort.

Foot orthotics can take on various forms and are constructed of several different carbon fibers, plastics, and softer more compressible materials such as cork or poron. Orthotics are made in what’s known as three quarter or full sole and are divided into three broad categories: those that primarily change foot function, those that are mainly protective or accommodative, and those that combine both functional control and accommodate.

Orthotic devices can be rigid, semi-rigid, soft, or calibrated. Most are made from a plaster mold taken of the feet (Fig. 11), which along with the doctor’s prescription, is sent to a lab where it is fabricated accordingly. Orthotic devices made specifically for skating boots won’t necessarily fit in everyday shoes and therefore 2 pairs may be necessary in some cases.

Rigid Orthotic Devices (Fig. 12) are designed to control foot function and are made from a firm plastic material or carbon fiber. They are mainly designed to control function in two major foot joints, which lie directly below the ankle. This type of orthotic is also used to eliminate pain in the legs, thighs, and lower back; sometimes a result of abnormal foot functions.

Semi-Rigid Orthotic Devices (Fig. 13) allows for greater balance of the foot while running or participating in various sport activities. By guiding the foot through proper functions, it allows the muscles and tendons to perform more efficiently. A semi-rigid orthotic is constructed from layers of soft materials which is then reinforced using slightly more rigid materials. A semi-rigid orthotic is often prescribed for athletes.

Soft Orthotic Devices (Fig. 14, 15) absorb shock, improve balance, and help take pressure off uncomfortable sore spots and are usually made of soft, compressible material. This type of orthotic is helpful for people with diabetes and is also effective for arthritis or deformities where there is a loss of fatty tissue on the side of the foot.

Calibrated Orthotic Devices (Fig. 16) factor in body weight, foot flexibility, and activity level in order to provide a custom calibrated level of support, delivering firm but comfortable control while maintaining the properties of an accommodating device. After the evaluating physician has thoroughly examined the patient’s feet, he will then write up the proper prescription for the orthotics.

Customized Insoles are much less detail oriented and unlike a prescription orthotic, no analysis is required. Superfeet is one good example of a customized insole (Fig. 17).

The first place to start looking for advice on orthotic devices is by asking a skater currently using them. They will be able to provide you with firsthand knowledge of the process and most likely be able to give you a good reference. If nobody at the rink is using orthotics, then search on line for names and phone numbers of sports podiatrists, physical therapists, or orthotists in the immediate area. Before making an appointment however, ask what experience the doctor has in working with figure skaters. 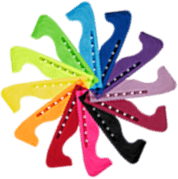 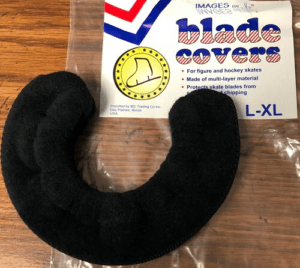 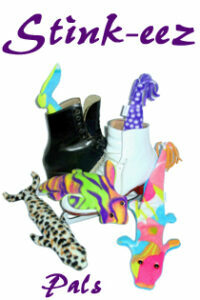