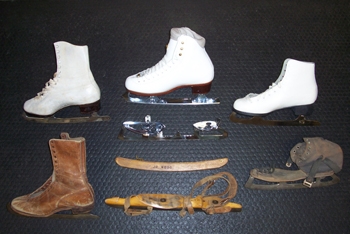 Whether you’re a competitive skater or just learning how to ice skate, knowing the history of figure skating is essential to understanding the sports’ rules!

How It All Started

Although ice skating has been a popular sport for hundreds of years, figure skating dates back to the late 1700’s in Britain, where skaters performed “compulsory figures”, carving specific figures into the ice. Although modern figure skating is named for this antiquated practice, today’s choreographed programs bear little resemblance to the formal routines performed back then. Figure skating as we know it can be traced only back to the 1860s, when an American skater and ballet dancer, Jackson Haines, set his routine to music, melding traditional ice skating with ballet steps.

Haines’ take on figure skating was not well received in the US, and he left the States to try his luck in Vienna, where his method – known as the “International Style” – took off, prompting a series of skating championships and leagues to be formed in the 1890s. At first, the only skaters who competed were men – a far cry from today’s skating field, which is brimming with talented ladies. In 1902, the first woman to compete in the World Championship, Madge Syers, took home second place.

In the Early 1900’s, figure skating had become a more mainstream sport, with Olympic inclusion beginning in 1908. During this time period American involvement in the sport began increasing. The United States Figure Skating Association, now known as US Figure Skating, came together in 1921, incorporating qualification standards for competition.

Throughout the 1920’s and 30’s, Norwegian skater Sonja Henie played a large role in figure skating, influencing both women’s skating and the crossover between skating and show business. A three-time Olympic gold medalist and 10-time World Champion, Henie dominated the figure skating scene for more than a decade. Infamous for wearing a short pleated skirt and white boots on the ice, Henie is credited for creating the modern ladies’ figure skating dress.

Despite skating’s increased popularity in the last century, the sport has seen some low points as well – particularly in 1961, when the entire U.S. Olympic team died in a plane crash, forcing the Americans into a rebuilding period and helping propel the Soviet Union to the forefront of the sport.

At the same time, the widespread use of TV and video has made figure skating more of a spectator sport than ever before. Until the 1960s, up to 60 percent of a skater’s score would come from their performance of figures, with the freestyle program taking a backseat. However, figures don’t make for particularly entertaining TV and because freestyle skating better showcases a skater’s athleticism, grace and creativity, the International Skating Union progressively decreased the importance of figures from 1968 on, eliminating them altogether in 1990.

Today figure skating is still one of the most-watched Olympic sports and is surging in popularity throughout Asia. This popularity is bringing a new set of elite skaters to the forefront and bringing the history of figure skating to a brand-new audience.